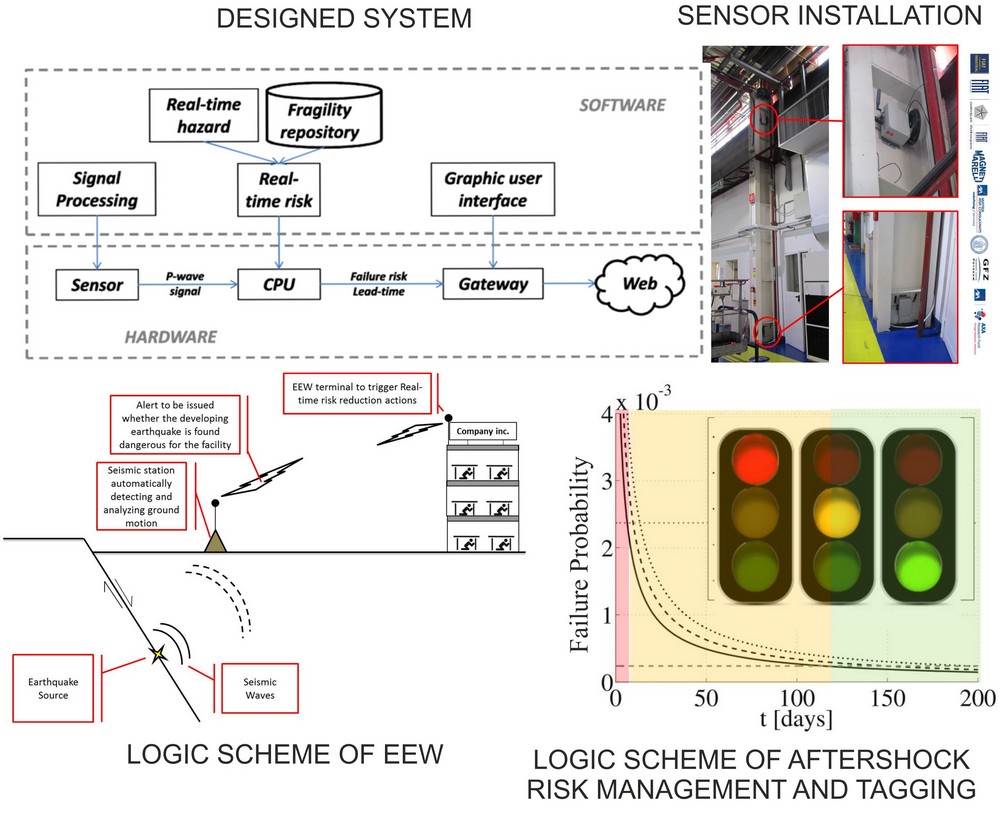 (i) The tool to manage seismic risk in real-time is earthquake early warning (EEW). The basic elements of an EEW system are: seismic instruments, a processing unit for the data measured by the sensors, and a transmission infrastructure spreading the alarm to the end users. This alarm may trigger security actions, manned or automated, expected to reduce the seismic risk in real time. The key design points for EEW applied to a speciﬁc structure are: (a) the estimated earthquake potential on the basis of the EEW information; (b) the available time before the earthquake strikes or lead time; and (c) the system performance (proxy for the loss) associated to the case the alarm is issued.
(ii) Major earthquakes (i.e., mainshocks) typically trigger a sequence of lower-magnitude events clustered both in time and space. Because the structural systems of interest might have suffered some damage in the mainshock, possibly worsen by damaging aftershocks, the failure risk may be large until the intensity of the sequence reduces or the structure is repaired. To evaluate this risk may be referred to as building tagging and allows to monitor the variation of structural risk due to both increased vulnerability, caused by cumulative damage, and time-decaying aftershock hazard, and to decide whether to prohibit access to anyone (i.e., red tag), allow access only to trained agents for emergency operations (i.e., yellow tag), or to resume from business interruptions allowing normal occupancy (i.e., green tag.)
(iii) Stochastic modeling of deteriorating structures at the scale of the life of the construction may include continuous degradation of structural characteristics and cumulative damage due to point overloads, such as earthquakes.
While (iii) is the subject of most of research and structural design procedures, topics (i) and (ii) are relatively unexplored, yet very relevant for industries, where downtime is the largest source of earthquake loss. Prof. Iunio Iervolino’s (from the reputed University of Naples Federico II, http://wpage.unina.it/iuniervo/) aims at assessing the benefits of earthquake early warning for factories. Prototypal implementation in the Magneti Marelli (FIAT Group) facility in Crevalcore (close to Bologna) should prove the efficiency of such warning systems before the ground motion hits the location— showing that action taken in a few tens of seconds may greatly limit the extent of non-structural and content loss, improving the resilience of the factory. Moreover, the project aims at investigating the feasibility of the use of the instrumentation for EEW, to also manage the aftershock risk of the facility in order to help the stakeholders and decision makers to tag the buildings and regulate occupancy during a seismic crisis.
Prof. Iervolino is well equipped to achieve his goals: he has teamed up with co-investigators with strong track records and works with partners in the prestigious German GeoForschungsZentrum, a world renowned center for hazard engineering with a broad range of international collaborations, including key links with Turkey and tsunami warning in the Indian Ocean. If the test site is successful, no doubt there will be followers!